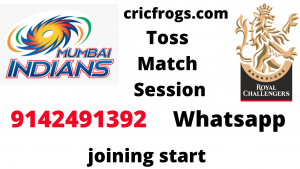 Cricket fans are ready to witness another major battle of the Indian Premier League. The first match of the IPL T20 is to be played between Mumbai Indians and Royal Challengers Bangalore on Friday, 9 April 2021 at the MA Chidambaram Stadium in Chennai. We are posting safe, accurate, and 100% safe today that predicts all matches of IPL T20 for free.

The batting order of Mumbai Indians looks very strong right now. Rohit Sharma will lead the batting department along with Quinton de Kock and both these batsmen will make their batting debut for Mumbai Indians. Quinton de Kock had performed well against Pakistan in the recent ODI series and scored 80 runs in the previous match. Rohit Sharma is also in good form nowadays. Hardik Pandya and Kieron Pollard can hit the ball very hard and they have the ability to score many runs in the final overs. Ishaan Kishan, Suryakumar Yadav can handle batting innings in the middle overs. Mumbai Indians also have a strong bowling department to defend the target. Jasprit Bumrah, Krunal Pandya, and Rahul Chahar are very good bowlers in the T20 format of cricket. Kieron Pollard is the third-highest wicket-taker in IPL history and has the ability to take wickets in the middle overs. Trent Boult, Nathan Coulter Nile, and Adam Milne are also available to help the bowling unit. Overall, Mumbai Indians is a strong side and we will have interesting matches to watch.

Royal Challengers Bangalore have struggled in almost all seasons of the Indian Premier League but their performance was better in the previous season where they qualified for playoff matches. He was defeated by Sunrisers Hyderabad in the eliminator match. Royal Challengers Bangalore failed to form a balanced team last season and we do not think they have a valuable team for this season. Once again, Virat Kohli and AB de Villiers have a lot of responsibility on their shoulders. He will have to lead the batting order otherwise, he may have to face a lot of problems. Virat Kohli will have to do something consistently good. Devdutt Padikkal did well in the previous season and also gave the best performance in the Vijay Hazare Trophy. We are not sure that he will be a part of the final playing XI for this match as he found COVID positive.

Captain Virat Kohli had earlier said that he would bat in this tournament. In this case, Aaron Finch will not be missed much. Glenn Maxwell is also available to bat in the middle overs but we feel RCB need an Indian batsman to maintain the balance of the batting order. Daniel Sam and Daniel Christian are available for selection and this adds some extra hope to the batting order. The bowling department of Royal Challengers Bangalore also has some weaknesses. RCB’s bowling unit will have to handle Navdeep Saini, Yuzvendra Chahal, Mohammad Siraj and Washington Sundar. It will be interesting to see how the bowling unit of Royal Challengers Bangalore handles the strong batting order of other teams.

Head to Head Mumbai vs Bangalore

Performance of both teams in recent five matches

Both teams are expected to win today’s match

Mumbai Indians is full of experienced and young players of T20 format. The batting order of this team is also strong and some famous players of T20 format are part of this squad, hence the chances of winning the match for Mumbai Indians has increased. Today the equation of who will win the cricket match prediction and who will win the cricket match is as follows

The toss is going to play an important role in the outcome of each match of the IPL T20 as we saw in the previous editions. As predicted by our toss, the team that wins the toss will field for the first time as it was difficult to defend in the recent matches of the IPL. The first teams in the field won 53% of the matches while the first teams won 47% of the IPL matches played at the MA Chidambaram Stadium.

The first match of the Indian Premier League is going to be held at the MA Chidambaram Stadium in Chennai. We had seen in the last matches played here that the pitch here at this location is good for batting in the early overs. The track is slower than the others and we have helped the spinners tremendously. We are hoping that the surface is bound to slow down and it will be a bit more difficult to bat in the last overs of this match. A score of 170 plus is going to be tough to chase.

The weather forecast of Chennai is good for this cricket match. There is no chance of rain in this area and we are hoping that we will have a full match to enjoy.