Today’s match prediction India will take on England in the first ODI on March 23 at the MCA Stadium in Pune. Both sides played just five matches in the T20I series, in which India won 3–2 and are progressing to victory and are expected to continue their good run. On the other hand, England who is the defending World Champions will do much better in this series. 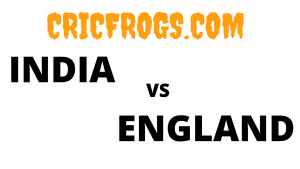 India’s strength is their batting line-up, as they have a great opening pair as Rohit Sharma and Shikhar Dhawan and then Kohli at number three, and these three batsmen are the backbone of India’s ODI batting line up and they have Shreyas Iyer, KL Rahul, Rishabh Pant. And Hardik Pandya in the middle and lower order who are particularly attacking Pant and Pandya, batsmen. In bowling, Bhuvneshwar Kumar and Shardul Thakur, who had a good T20I series, will be important once again with the support of Hardik and then they will have spinners Chahal or Kuldeep Yadav who are both goods in this format.
On the other hand, England’s strength is also their batting line-up as Jason Roy, Johnny Bairstow, Eoin Morgan, Jose Butler, Ben Stokes, and Sam Billings and all these batsmen are match-winners in this format and bat with an aggressive stance. It has been successful for them and then in bowling, Mark Wood and Adil Rashid will be the spearheads of the attack, which both upset the Indian batsmen in the T20 series.

There is not much weakness in India but the absence of Bumrah has weakened the pace department, Yuzvendra Chahal is coming up with a poor T20 series and Kuldeep Yadav has not played the game for some time and bowling in this way is not solid. The moment is visible. On the other hand, England is also without Jofra Archer so bowling may be a cause for concern for them.

Here we are going to discuss both the game combination of India and England and the possible playing eleven, which will be useful to make the IND vs ENG Dream 11 team.

India is expected to go with five batsmen, one all-rounder, and five bowlers. On the other hand, England is also expected to play with a similar 11 combination.

The India tour of England has been mostly about visitors who started with a bang and then separated. The same thing happened in the Test series, and things did not change in the T20I as well. It is now time for the ODI series, which is scheduled to be held on March 23 at the Maharashtra Cricket Association Stadium in Pune. Both teams have announced their respective squads for red-ball fixtures.

In the last two ODIs, India has lost five out of six matches, but their recent form should give them the desired confidence to move forward. In Pune, Men in Blue have played four ODIs and won two of them. Against England, they have won their only game back in 2017. Virat Kohli and Kedar Jadhav scored tons. But it will not be easy to defeat Brits with power-packed units.

Pune’s pitch has been batting-friendly for years. In four ODIs, the average score is around 280, suggesting that a fairly high-scoring game seems to be on the cards. There is no chance of rain and the temperature will be around 31 degrees Celsius. The humidity will be mostly in the 20s.

England did well in the T20 series but unfortunately, they could not win the series. The management of the England cricket team did not make any significant changes to their squad for this ODI series. Eoin Morgan will lead England in this series of three ODIs. England’s batting order is good but not strong compared to the batting department of Team India. Along with captain Eoin Morgan, Liam Livingstone and Jason Roy will have to take care of the batting department.

India failed at the beginning of the T20 series, but in the end, they won the 5 T20 matches series by a margin of 3–2. The T20 series title will boost the confidence of Team India. Some changes were made to the final squad for the ODI series by the management of Team India. Shubman Gill, Shikhar Dhawan, Krunal Pandya, Mohammed Siraj, Kuldeep Yadav, and Prisidh Krishna are in the ODI squad. Team India’s batting order is strong and least experienced on paper. Captain Virat Kohli, Rohit Sharma, Shikhar Dhawan, Shreyas Iyer, and Suryakumar Yadav are the important batsmen of Team India.

The best all-rounders in the world like Hardik Pandya, Krunal Pandya, and Washington Sundar are also part of the squad of the Indian team. Rishabh Pant and KL Rahul are part of the team of India’s ODI team. Talking about the bowling department compared to the bowling unit of England, Team India is a bit weak. Yuzvendra Chahal, Kuldeep Yadav, T Natarajan, Bhuvneshwar Kumar, Mohammad Siraj, Shardul Thakur, and Prisidh Krishna will look after the bowling unit of the Indian team in this series of three ODIs.